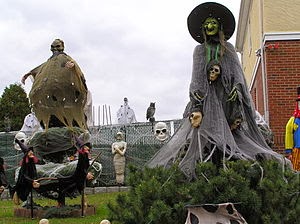 Halloween or Hallowe'en (/ˌhæləˈwin, -oʊˈin, ˌhɒl-/; a contraction of "All Hallows' Evening"),[5] also known as All Hallows' Eve,[6] is a yearly celebration observed in a number of countries on October 31, the eve of the Western Christian feast of All Hallows' Day. It initiates the triduum of Hallowmas, the time in the liturgical year dedicated to remembering the dead, including saints (hallows), martyrs, and all the faithful departed believers.[7]
According to many scholars, All Hallows' Eve is a Christianized feast initially influenced by Celtic harvest festivals,[8][9] with possible pagan roots, particularly the Gaelic Samhain.[6][10][11] Other academics maintain that it originated independently of Samhain and has solely Christian roots.[12]
Typical festive Halloween activities include trick-or-treating (or the related "guising" or "trunk-or-treating"), attending costume parties, decorating, carving pumpkins into jack-o'-lanterns, lighting bonfires, apple bobbing, visiting haunted attractions, playing pranks, telling scary stories, and watching horror films.

Pancake Day or Shrove Tuesday is the day preceding Ash Wednesday, the first day of Lent. Shrove Tuesday is determined by Easter; its date changes annually. Pancakes are associated with the day preceding Lent because they were a way to use up rich foods such as eggs, milk, and sugar, before the fasting season of the 40 days of Lent. Shrove Tuesday was once known as a "half-holiday" in England. It started at 11:00am with the ringing of a church bell. On Pancake Day, "pancake races" are held in villages and towns across the United Kingdom. Participants with frying pans race through the streets tossing pancakes into the air and catching them in the pan whilst running. 
Within China, regional customs and traditions concerning the celebration of the Chinese new year vary widely. People will pour out their money to buy presents, decoration, material, food, and clothing. It is also traditional for every family to thoroughly cleanse the house, in order to sweep away any ill-fortune and to make way for good incoming luck. Windows and doors will be decorated with red colour paper-cuts and couplets with popular themes of “good fortune” or “happiness”, "wealth", and "longevity." On the Eve of Chinese New Year, supper is a feast with families. Food will include such items as pigs, ducks, chicken and sweet delicacies. The family will end the night with firecrackers. Early the next morning, children will greet their parents by wishing them a healthy and happy new year, and receive money in red paper envelopes. The Chinese New Year tradition is to reconcile, forget all grudges and sincerely wish peace and happiness for everyone.

Black Friday is the name given to the day following Thanksgiving Day in the United States, traditionally the beginning of the Christmas shopping season. On this day, many shops offer promotional sales to kick off the holiday shopping season.
In Spain, Mediamarkt has announced Black Friday in its leaflet.

What season do you prefer?